15 Sep 2018 - With Nature Society Singapore and Restore Ubin Mangrove Initiative, a group of passionate volunteers took part in the International Coastal Clean-up Singapore which took place at Pulau Ubin (Kampong Durian).  On this special day, many people around the world were also doing coastal clean up.  This site was designated for mangroves restoration. 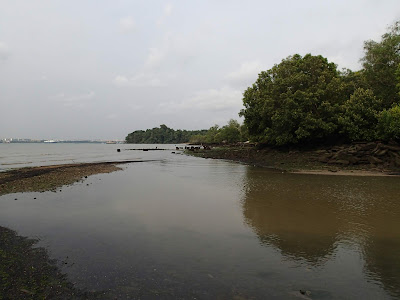 When we arrived, a small group of us spring into action in search for abandoned nets which were seen during the last round but did not have sufficient time to remove them.  On the high shores,  there were no nets found as there were some contractors who were there before us and had help to remove 2 bags of nets together with many other debris. (No Photos).  As we comb around the surrounding, we chanced upon a net, it was entangled and well camouflage with seaweed. 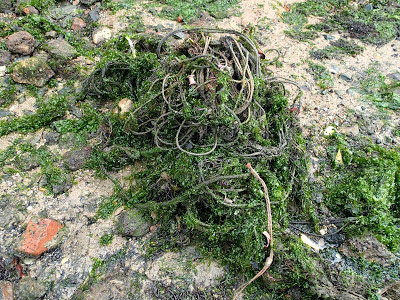 More photos...we need to act fast as tide was rising. 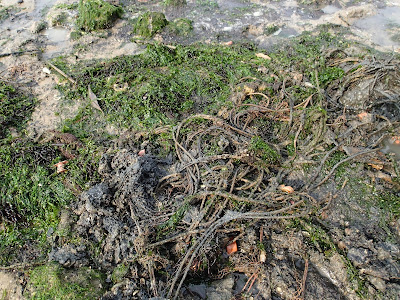 We found some monofilament nets together with some nylon rope nets. We cut the nets up and separated them into a few bags as they were rather heavy. 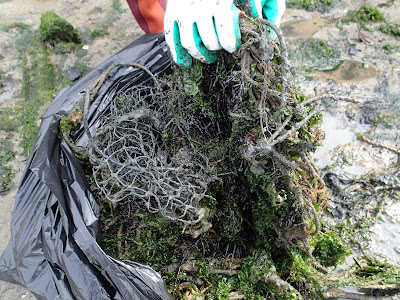 Good news, there were no marine critters that were trapped in the nets collected.  Thanks to all volunteers who had contributed their time and endless efforts in helping to maintain our shores. 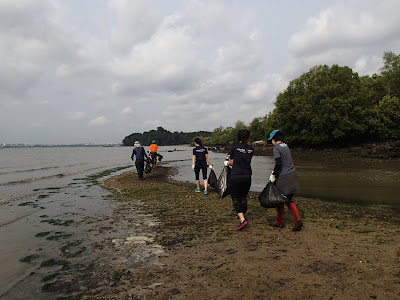 Posted by ricardo08kuah at 4:16 AM No comments:

During a routine survey trip at Pulau Seduku, a small team chanced upon a half buried abandoned drift net. It was badly entangled and well camouflage with seaweed and one would have mistaken it for a chunk of seaweed washed up to shore. 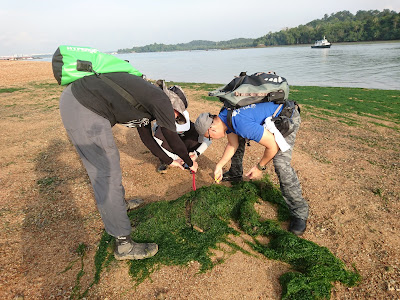 While sorting out the net, we found a few thunder crabs. We wasted no time to have the crabs freed as tide was rising. They were badly entangled with the monofilament net. 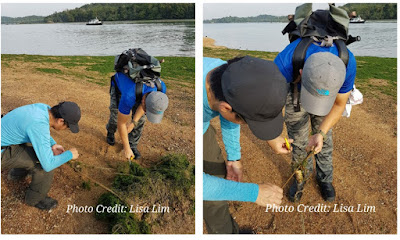 A close up shot on how badly the crabs were entangled in the net. 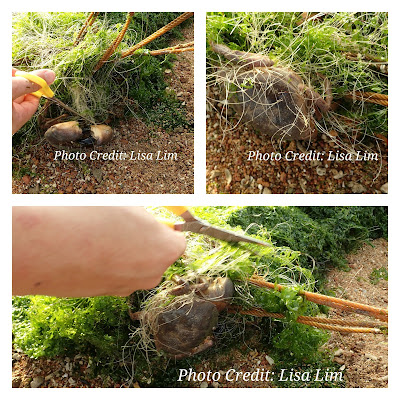 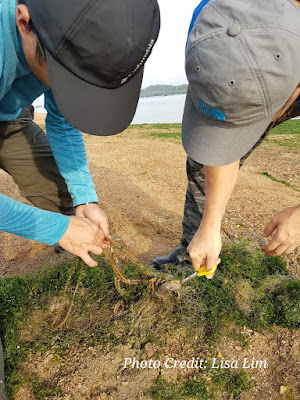 The crabs were aggressive and kept wanting to strike back when we try to set them free. On the other hand, we were trying to be careful not to break any of their pincers and legs. 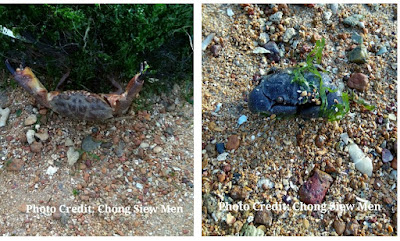 More photos of team helping to remove the net. 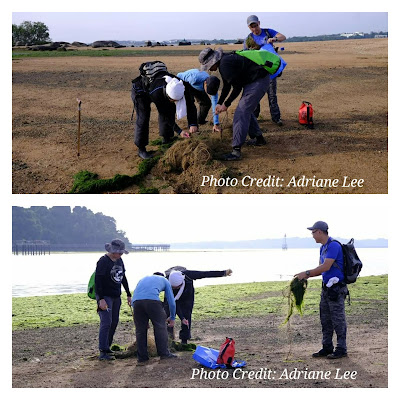 Throughout this episode,  we rescued a total of 3 thunder crabs a sea cucumber and good news was no pincers and legs were broken from these crabs. As the net was half buried and long, we decided to remove only those that were exposed and leaving behind the rest that are still buried.  Abandoned nets or ghost nets are a hazard to marine life as they kill after they are lost. 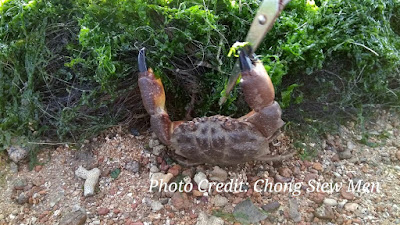 Thanks to the team who have helped out in this project and big thanks to Lisa Lim, Chong Siew Men and Adriane Lee for their photo contribution to this blog post. 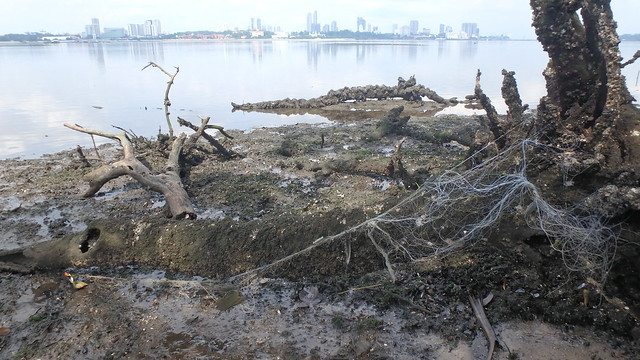 It didn't take us long to remove the nets. If only those who used the net just took the few extra steps and a few minutes to dispose of the net properly. Then animals will not be constantly trapped in the net.

Email ThisBlogThis!Share to TwitterShare to FacebookShare to Pinterest
Labels: kranji

A small team came across an abandoned net on Chek Jawa during a routine survey.

The net was too large to remove for the small team. So it was left behind after documenting what was trapped. The presence of the net was reported to Ubin NParks on the same day. We hope they can arrange the removal of the net.

It was a hot and crispy day with temperature soaring to 35 degrees. 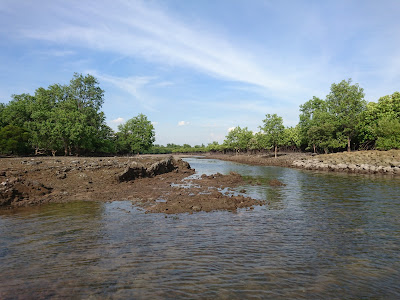 After 3 months, we are back on this stretch of the shore for a site survey looking out for abandoned nets and collecting data helping to understand the impacts of abandoned nets affecting our shores.

26 Aug 2017 - With Nature Society Singapore and Restore Ubin Mangrove Initiative. Volunteers helped in coastal cleanup and removal of leftover nets.  Some nets were found entangled with the roots of mangrove trees. Abandoned nets have always been a known issue for this area (Kampong Durian). 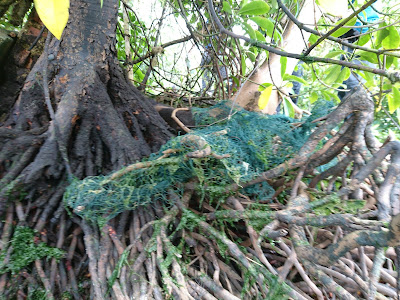 As the team combed along the coast, more nets were found. It was not easy to remove the nets, as some the nets were trapped among the rocks. Nevertheless, this did not hamper the team's effort to slowly remove the nets. Here's more on the operations that took place.

Recently, a team of volunteers together with a few staff from Nparks did a site survey on Pulau Semakau for abandoned nets and collecting data on the net together with what is trapped in it. 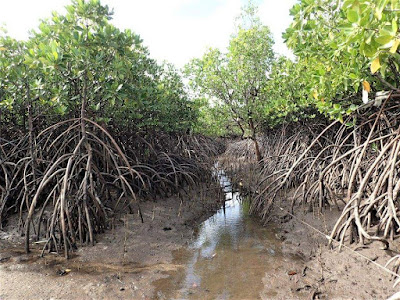 The team split into 2 groups, each group helping to comb different sectors of the shore. One group who combed the mangrove areas found a few nets entangled with the mangroves roots.  One of the longest net found was about 25m in length. A horseshoe crab was rescued from it. Here's more on the operations that took place.

latest on other efforts for Singapore's shores